As the Rector Major wrote in the prologue, with the book “Witnesses of Evangelical Radicalism: A Biblical and Salesian Reflection”, the Salesian Biblical Association (ABS) has desired to accompany and illumine the historic moment we are living in the Congregation by offering us reflections on the radical dimension that characterizes our following of Jesus according to the gospel tradition and in its concrete expression in salesian life and mission today.

The book brings together various articles which have a strong biblical and salesian accent on the theme of evangelical radicalism, “a feature which does not take its place at the side of others, but it is rather a fundamental dimension of our life”.1This joyful initiative is not a novelty for the ABS: from its very inception in 1983, the Association has participated in the journey of our Congregation, bringing out their reflections and suggesting fundamental options based on the Word of God and on the living out of the salesian charism in daily life.2

On this occasion the theme of GC27, evangelical radicalism, called for a particular attention. The concept in itself appears to be a little innovative in present day exegesis, and its specific contents are still to be identified. And although it is being applied to the religious life, it should not be considered as exclusive. We, salesians, live and witness to the radical approach of the gospel through “work and temperance”, which is “the salesian way of understanding and practicing evangelical radicalism.”3

Because witnessing to this radicalism “is not a feature which takes its place at the side of others, but rather a fundamental dimension of our life”,4the Salesian Biblical Association, following its traditional practice, would like to offer to the Congregation on the occasion of GC27 some reflections on the dimension of radicalism that characterizes the following of Christ, which appears in some texts of the NT, and how it is translated into salesian life and mission today. 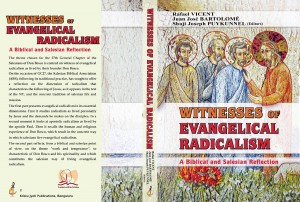 The first part presents evangelical radicalism in its essential dimensions: first as lived personally by Jesus, Paul and Don Bosco, and then as an unconditional requirement for the life and action of their disciples.

The second part offers a biblical and salesian reflection on the words “work and temperance”. Inspired by those who are sent in the NT (Jesus, Paul, the twelve), Jordi Latorre looks at the life of the salesian as an apostolic action, which brings about the salvation willed by God. But it is an action carried out in temperance, a virtue which has deep biblical roots, as illustrated by Mario Cimosa. In the article that concludes the volume, Morand Wirth proposes again a salesian understanding of the classical expression looking at the writings of the Rectors Major, from Don Rua to Don Chavez.

The Salesian Biblical Association (ABS) offers to all confreres, and especially to the members of the GC27, this volume in which we have tried to clarify the biblical foundation and the salesian peculiarity of the demands of evangelical radicalism as proposed by Don Chavez. May the Mother of God who was radically open to God’s will, be our teacher and guide in following Jesus at servants of the young.